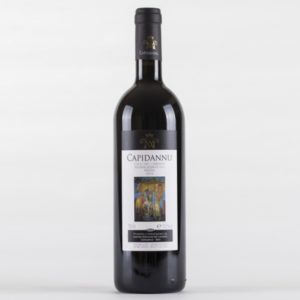 Capidannu is a red wine with an oustanding body and it is aged for one year in brand new French and Hungarian oak barrels. Its winy characteristics are kept intact by a polyphenol-rich content which prevents wood aromatic and flavour compounds from prevailing over wine qualities. This wine is obtained by equally blending Cabernet sauvignon and Cabernet franc and it is classified as “IGT Colli del Limbara Rosso” In the Corsican-Gallurese dialect Capidannu means September, the grape-harvest season. This derives from Latin “ caput anni” (the beginning of the year) and denotes the Sardinian agricultural and pastoral vocation which along with a lasting Byzantine domination of the island led to the use of the Byzantine Calendar instead of the Gregorian system. Likewise the Byzantine system, the Sardinian calendar used a year starting on September 1 and this month was therefore called capidannu (with similar variations). Sardinians used to call “ capodanno” the beginning of the agricultural working season, especially regarding cereals. The label shows a reproduction of a beautiful painting by Sardininan painter Sardo Mario Delitala, which portrays grape-stomping.

We use cookies to ensure that we give you the best experience on our website. If you continue to use this site we will assume that you are happy with it.OkPrivacy policy